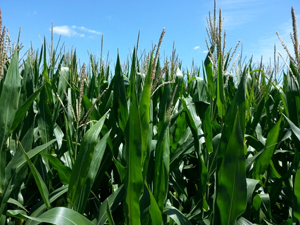 Thirty-nine percent of Iowa’s corn crop is in “good” condition, according to a weekly report issued today by the U.S. Department of Agriculture.

The agency lists 10-percent of Iowa’s corn in “excellent” condition, 34-percent is “fair,” 12-percent “poor,” and five-percent of the corn is in “very poor” condition.

Iowa Farm Service Agency Director John Whitaker says more than 70-percent of the state is now on the USDA’s Drought Monitor as being abnormally dry.

“I drove around the state over the weekend, at least the northern part of the state, and it is surprising how quickly we can turn dry after the damp, wet weather we had this spring,” Whitaker said.

In another report issued today, the USDA lowered the anticipated size of the nation’s corn crop. The forecast now calls for farmer to harvest 13.763 billion bushels, down from 13.95 billion bushels forecast last month.

Whitaker says many Iowa corn growers have been concerned with both the lack of rain and the lack of heat. “But at the same time, the fact that it has been cool has been good for the crop. Corn develops well in cool weather. It truly is a cool season grass. But, we do need moisture,” Whitaker said.

Nine-percent of Iowa’s soybean crop is labeled in “excellent” condition by the USDA — 39-percent of the state’s soybeans are in “good” condition, 37-percent “fair,” 11-percent “poor,” and four-percent “very poor.” U.S. soybean production is forecast at 3.26 billion bushels in 2013, up 8 percent from last year, but down from a prior estimate of 3.42 billion bushels.