You are here: Home / News / Governor to meet with advocates for youth in Toledo juvenile home 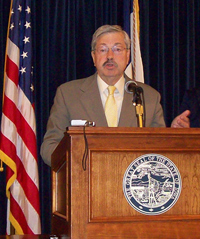 Governor Terry Branstad will meet with members of a group who first raised the alarm about the use of long-term isoloation for teenage girls in the Iowa Juvenile Home in Toledo.

“We take the problems with Toledo very seriously. I’m going to be meeting with the group Disability Rights Iowa to talk about their concerns. My chief of staff has already met with them,” Branstad says. “I’m concerned about the need to change the culture there.”

Disability Rights Iowa advocates visited the home late last year and found three young women being held in isolation cells, one for nearly a year. The home’s superintendent quit in February. Branstad isn’t saying when the search for a new superintendent might be completed.

Two state senators are asking for the state ombudsman to investigate complaints about care in the juvenile home. Branstad says any citizen can make such a request of the ombudsman’s office, which is a small investigative unit in the legislative branch of government.

The senators say it’s important to have an independent investigation to find out why top managers in the home approved of the use of long-term isolation and to ensure it doesn’t happen again.