You are here: Home / Agriculture / Iowa family up for national cattle award 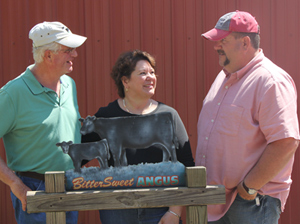 A farm family in northwest Iowa’s Clay County is in the running for a national award that recognizes cattle producers who take steps to protect and enhance the environment.

Greg and Lola Wood and their son Chris attended a conference in Colorado last week where they were announced as the Region 3 winner in the Environmental Stewardship Award Program (ESAP).

The Wood family operates a cattle and hay farm called BitterSweet Acres near Greenville. They’ve maintained forage production on more than 400 acres at a time when there’s increasing pressure to convert to row crops.

“That’s kind of what our award is based on is that we are a forage operation in row crop country,” Greg Wood said. “We run 150 plus acres of pasture and we runs about 75 pure bred Angus cows along with the calves.” U.S. Census of Agriculture data for Clay County shows there has been a 60-percent drop in pasture acres between 1997 and 2007.

But, the commitment to forage production isn’t the only reason Greg Wood and his family are being honored. “We have a solar unit that we pump water with,” Wood said. “Most solar water pumping systems are just based for use in the summer for grazing, but we have it designed to use it year-round.” The Wood family is up against six other regional winners for the national ESAP title.

The winner will be announced during the Cattle Industry Annual Convention and Trade Show in Nashville, Tennessee in February.