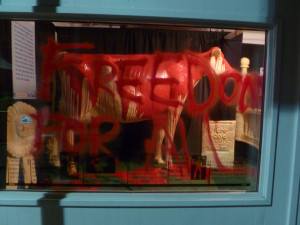 The group “Iowans for Animal Liberation” sent out this photo claiming credit for vandalizing the butter cow.

One of the most popular attractions at the Iowa State Fair was vandalized over the weekend.

But, very few people knew about it until a group called “Iowans for Animal Liberation” sent out news release this morning claiming responsibility for the damage.

“Basically, we’ve heard some individuals stayed in the Ag Building until that time. They took probably a gallon of red paint and poured it over the butter cow. They wrote on the wall ‘Freedom For All.'”

The butter cow has been part of the Iowa State Fair for 102 years.

Bright says butter sculptor Sarah Pratt was the first to spot the vandalism early Sunday. She scraped the paint off, so fair-goers were mostly unaware of the incident.

“(Sarah Pratt) took care of all of it and it was back open at 9 a.m.,” Bright says. “So, basically, no one ever knew about this act of vandalism. It was taken care of and the Fair was back open.” No arrests have been made.

There are not video surveillance cameras inside the Ag Building, but Bright says there are plenty of other cameras on the fairgrounds.

“Our intelligence bureau is looking at the video from that night to see if they can see anybody coming out of that building and roaming around the fairgrounds,” Bright says.

The email from Iowans for Animal Liberation states group members hid in the Agriculture Building until it closed. According to the group, “the paint represents the blood of 11 billion animals murdered each year in slaughterhouses, egg farms, and dairies.”

A photo of the butter cow covered in red paint was provided with the group’s email.