You are here: Home / Human Interest / Fighter jet to get helicopter lift from Sioux City to Goldstar Museum 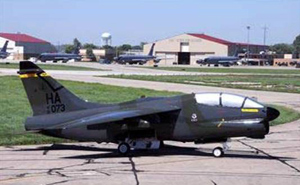 This jet will be airlifted from Sioux City to Camp Dodge in Johnston.

You may see an unusual combination of aircraft flying across the sky in Iowa Thursday.

The Iowa National Guard plans to transport an A-7 Corsair jet from the 185th Air Refueling Wing in Sioux City via a Chinook helicopter to the Goldstar Museum at Camp Dodge in Johnston.

Technicians in Sioux City gave the jet a makeover to honor the memory of Tech Sergeant Bruce Johnson and Captain Andy Erickson, who once flew and maintained the aircraft.

The helicopter will take off carrying the jet around 7:30 in the morning and arrive at Camp Dodge sometime after 11:30. The jet will then become part of the outdoor equipment display at the museum.