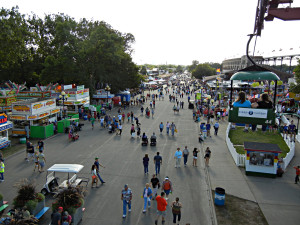 Many people associate the fair with high heat and humidity, so they may surprised to learn over the course of the State Fair’s 125 year history, only one fair exceeded a temperature of 100 degrees.

The National Weather Service has compiled a report on the history of Iowa State Fair weather and it shows only the 1983 fair had temps in the triple digits.

Meteorologist Roger Vachalek says there’s a simple explanation for why it often feels hotter than it actually is on the fairgrounds.

“When you’re walking on asphalt and around that whole area, it seems a lot hotter. I think there’s also reflection off that asphalt which may come right back up and make you feel warmer too,” Vachalek says. The report shows the highest temperature ever recorded in Des Moines during the Iowa State Fair occurred on August 16, 1983 with a reading of 108 degrees.

Only six days of the Iowa State Fair have seen 100 degree weather and all of them occurred in 1983. So far this year, less than one inch of rain has fallen in Des Moines over the first six days of the fair. Vachalek says it’s a much different story when compared to the State Fair held 36 years ago.

The second wettest fair, at 6.22 inches of rain, occurred in 1993. Over the last three decades, the average rainfall during the State Fair was 1.57 inches, while the average high temperature was 82.7 degrees.