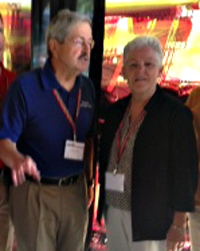 The new administrator of the U.S. Environmental Protection Agency spoke at the Iowa State Fair today, promising to improve the agency’s “relationship” with the nation’s farmers. Gina McCarthy addressed an invitation-only group of farmers in the Iowa Farm Bureau’s picnic shelter on the fairgrounds.

“At the end of my term, we will have a stronger, more productive, more trusting relationship between the EPA and the agriculture community,” McCarthy said.

McCarthy did not answer reporters’ questions today, but Governor Terry Branstad did.

“I didn’t find anything I disagreed with that she had to say here today,” Branstad told reporters, “and we’re very hopeful that means a kind of new, fresh approach and a collaborative approach that includes the opportunity to interact with the people that are affected.”

Branstad expects the EPA to give the go-ahead for his administration’s plan that calls for voluntary rather than mandatory reduction of nitrates in Iowa waterways.

“We think we’ve got a really good relationship with them and that they will take, as she said, a common-sense approach and work with the producers,” Branstad told reporters.

McCarthy has been the nation’s top environmental official for three weeks. She stressed collaboration rather than confrontation during her remarks to the State Fair crowd.

“The challenge today is to just stop arguing about the problem and really start driving solutions,” McCarthy said.

The EPA administrator also met privately with environmentalists and members of Iowa Citizens for Community Improvement, groups that have asked the EPA to step in and regulate the state’s large-scale livestock facilities and impose limits on farm fertilizer use in Iowa. The groups argue nitrate pollution is growing worse in the state’s lakes and streams and state officials aren’t doing enough to clean up or prevent the problem.