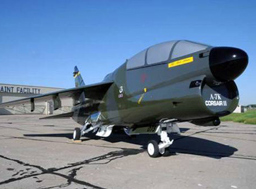 A fighter jet is making its way from western to central Iowa this morning, but there’s no afterburners or supersonic flight involved. Iowa National Guard spokesman, Colonel Greg Hapgood, says the A-7 Corsair is being transported from Sioux City to Camp Dodge in Johnson by a Chinook helicopter.

“The plane is a 1981 version aircraft, it’s been totally refurbished for display by technicians from the 185th Air Refueling Wing up in Sioux City. That plane will be put on display at Camp Dodge as part of our historic project placing vintage pieces of equipment around camp,” Hapgood says.

This version of the Corsair is rare because it was made specifically for use by the Air National Guard. Hapgood says carrying the jet in what is called a “sling load” with the Chinook helicopter proved to be the best way to make the trip.

“It’s difficult to find a route where an aircraft could actually travel on the road because of its height and width,” Hapgood explains. “We’ve done this a number of times in the Iowa National Guard where we’ve moved certain pieces of vintage aircraft by helicopter. This is one of those opportunities which great training for our soldiers and airmen. And the parameters are right from a technical sense, so we decided to move that direction.”

The engine and control systems were removed from the plane as it was prepared to be a display, so it couldn’t be flown under its own power. And it also required a mover that could handle a heavy load. Hapgood says the airplane weighs just under 1,800 pounds after the engine and all the hydraulics and fluids are removed.

This type of plane was flown by the 185th in 1977 through 1991 when it was still a fighter wing, and this particular jet will honor that heritage. “Traditionally on the side of an aircraft, they paint the name of the pilot of that aircraft and also the name of the crew chief. In this particular case Tech Sergeant Bruce Johnson was a crew chief at the 185th Fighter Wing and Captain Andy Erickson was a pilot that both worked on and flew this aircraft,” Hapgood says.

“Those two gentlemen have passed away, and in their honor for their service, technicians at the 185th have painted their names on the side of the aircraft.” Weather delayed the start of the flight in Sioux City today, and the jet is expected to arrive at Camp Dodge sometime early this afternoon.