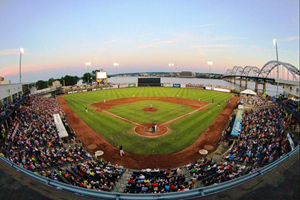 Davenport’s Modern Woodmen Park is rated the number-one minor league ballpark in America in a new poll from USA Today and the website, www.10Best.com.

The stadium is home to the Quad Cities River Bandits, the Class-A affiliate of the Houston Astros. Dave Heller owns the River Bandits and says the park is a beautiful place for baseball.

“It is the perfect mix of the old style brick charm of the old ballparks with all of the latest and greatest modern amenities and conveniences,” Heller says, “with a spectacular view of the Mississippi River and the Centennial Bridge.”

USA Today chose 20 ballparks for the competition, including Toledo, Memphis and Oklahoma City.

“It’s always a pleasant surprise when you’re in a national balloting competition against cities that are, in some instances, ten times the size of yours and yet you still win,” Heller says. “That shows it’s not just people here in the Quad Cities that are voting for us but all over the country and all over the world.”

The River Bandits will celebrate next Monday by selling general admission game tickets for one dollar, with upgrades for another buck. Owned by the city of Davenport, Modern Woodmen Park opened in 1931 and has hosted a Midwest League team since 1960. Just last week, Des Moines ranked tops on the Forbes magazine list for Best Places for Business and Careers.