You are here: Home / News / It’s a festival with nothing planned in Des Moines 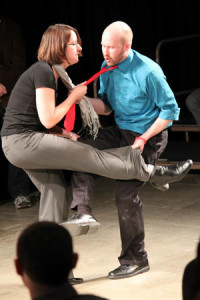 Nine improvisational comedy troupes from across the region will be in Des Moines this weekend for the 4th annual Iowa Improv Fest.

Improvisation is an art form popularized by comedians like Robin Williams and the TV show “Whose Line Is It Anyway?” Sarah Noll Wilson is a member of the central Iowa-based Comedy XPeriment, which is hosting the festival.

“No matter what their format, everything is going to be based off of audience suggestions,” Noll Wilson says.

“It’s a very interactive show and very high energy. Audience members have to come ready to shout out suggestions, but it doesn’t mean that they’ll get pulled up from their seat. Some people worry about that with improv, that they’re going to get pulled into a scene but that’s not always the case.”

While many people would be scared to death to go onstage and stand in the spotlight with no script, others thrive on the adrenaline rush of making up the story on the spot. “I think everybody should take a basic improv class because it’s all about effective listening and making each other look good and having a lot of fun,” Noll Wilson says.

“I’ve been doing it eight years and I still get butterflies in my stomach before a show because you just never know what’s going to happen.” People in the audience are encouraged to shout out suggestions upon which the comedians build a performance, conjured out of their own imaginations.

It can bring a 30-second skit or it may evolve into something that runs several minutes. The often-outlandish scenarios might pair an Elvis impersonator packing parachutes with a lab tech-ninja who milks kittens.

“The thing I love about improvisation compared to other art forms is that when I’m performing with my team, I know they’ve got my back and they know I’ve got their backs,” she says. “If suddenly I’m flailing out there, they’re going to come in and make me look good or they’re going to edit the scene and we’re going to move on.”

In addition to Comedy XPeriment, troupes taking part in the festival tonight (Friday) and Saturday night at the Civic Center of Des Moines’ Stoner Theater include: 88improv from Omaha, Comics In Action from Cedar Rapids, Paperback Rhino from Iowa City, Half Masted from Cedar Falls, The Weisenheimers from Omaha, Grandma Mojo’s from Ames and Anything Improv from Des Moines.