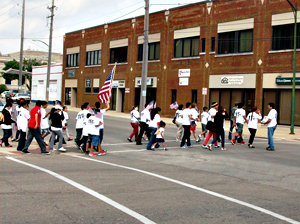 The tour is headed by the Minnesota-based Assembly for Civil Rights. One of their stops on Monday afternoon was at King’s Mason City field office.

“If any party is looking for what’s best for America, comprehensive immigration is the best thing that ever will happen to America if it passes this year,” said Pablo Tapia, co-founder of Assembly for Civil Rights.

“Not only for the economical benefits but it will reflect the values of America…freedom, hard work, and follow the rules, but make the rules work so everybody can follow them.” 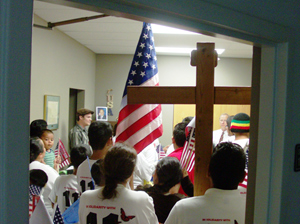 Tapia said his group is offended by King’s controversial comments about illegal immigrants smuggling drugs across the border, but, according to Tapia, their approach in responding to King’s remarks is more of a spiritual one rather than an “in your face” method.

“We are a group of faith, so our faith values don’t let us fall into this anger which destroys people,” he said. “…That’s why we are here to pray for Mr. King…and we know that God will guide him to the righteous path…It’s just a matter of connecting with each other and he will change his mind.”

Tapia told the manager of King’s Mason City office that they group hopes to meet with King in the future.

The group will make stops in Wisconsin, Illinois and Indiana on Tuesday, Ohio on Wednesday and Missouri on Thursday.