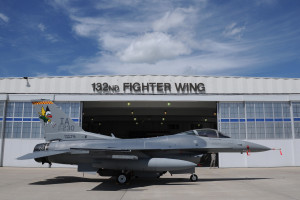 The departure of Iowa’s last F-16 fighter jets is winding down. But the squadron of 21 planes is not being retired, the aircraft are being transferred from Des Moines to Atlantic City.

Iowa Air National Guard Executive Officer Ken Hartman says the crew and mechanics are relieved that the planes won’t be shut down. “It’s always good when the aircraft your guys have worked on for several years and put their blood, sweat, and tears into continue to fly and continue to perform the mission they were intended to perform,” Hartman says. The F-16s are replacing slightly older aircraft in the New Jersey National Guard.

The Iowa Air National Guard has transferred about half of its F-16 squadron with tail fins repainted — Herky the Hawk is being replaced with New Jersey Devils. “It’s mostly emotional for the maintenance crews that have worked on their airplanes,” Hartman says. “A lot of these have pilots’ names on the side, they have the crew chief’s name on the other side, so a lot of personal a pride in the aircraft…a lot of guys took it pretty hard that these jets are going away.”

Except for maintenance-related flights, Hartman says there are no more scheduled missions for the F-16s, although a training day is planned for September 7th, when dignitaries join the unit in a private tribute to 72 years of flight by the 132nd Air Wing.

The 21 F-16s in Des Moines have been fired on in Iraq and flew bombing missions in Afghanistan. The last plane should be gone by the end of October, as the air wing transitions to its new mission involving remotely piloted aircraft.