You are here: Home / Agriculture / Iowa on track for 5th driest August 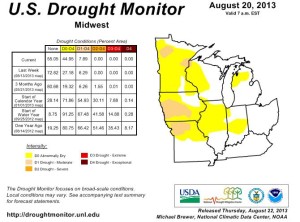 Some areas of Iowa received rain on Thursday, but it likely wasn’t enough to help Iowa’s deteriorating crop conditions. State Climatologist Harry Hillaker says the wettest spring in Iowa history has been followed by an extremely dry summer.

“The U.S. Drought Monitor has a good portion of west central and central Iowa and surrounding areas in the ‘moderate drought’ category and most of the rest of the state in what is called ‘abnormally dry,’ which is technically not drought, but just a step away from that,” Hillaker says. Given the forecast, those areas that are in the “abnormally dry” category are likely to be in the “moderate drought” category when the U.S. Drought Monitor is updated next Thursday.

Iowa is on track for recording the 5th driest August on record. Hillaker is projecting some regions of the state will set records for the driest August ever. “For some areas — Cedar Rapids, Iowa City, Burlington — they’re in record territory. Burlington has only a trace of rain for the whole month of August and Iowa City, just four-hundredths of an inch,” Hillaker says. Cedar Rapids has received roughly six-hundredths of an inch of rain this month.

Relatively cool temperatures have been mitigating the effects of the rain deficits, but Hillaker says with hot and dry weather predicted for the rest of August, “our luck has run out.” High temperatures through much of next week, starting Sunday, are expected in the mid to upper 90s.