You are here: Home / Health / Medicine / Branstad asks to meet with Obama, Sebelius in September (AUDIO) 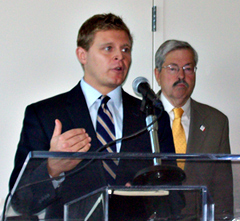 State officials have finally submitted their formal request to the federal government, asking for approval of Iowa’s version of Medicaid expansion.

“We’ve worked with the Department of Health and Human Services at the federal level on a collaborative manner,” says Michael Bousselot, an aide to Governor Branstad who has been the governor’s point person on the project. “…They actually requested that we split our single waiver into two waivers.”

The Iowa Health and Wellness Plan that cleared the 2013 Iowa legislature created a two-tiered system for enrolling more uninsured Iowans in Medicaid.

According to the plan, Iowans who are at or below the poverty level would get full coverage with a small monthly premium that will not be charged if the person takes steps toward a healthier lifestyle, like losing weight or quitting smoking.

Those in the bracket above with incomes up to 138 percent of the poverty line would get subsidies to buy health care coverage on the new “Insurance Exchange” that is to open October 1.

Bousselot and other Branstad administration officials had originally indicated the State of Iowa would submit its waiver request to the federal government by late June, but the paperwork was submitted last Friday.

“Because we split it into two waivers, it did give us a little bit more time to get it in,” Bousselot says. “However, negotiations have been on-going…We believe that this ambitious program is going to be approved…and its importance, I think, is demonstrated by the governor and lieutenant governor asking even for a meeting with the president and (the U.S. Health and Human Services) secretary, really to tout our bipartisan plan.”

Bousselot expects the Health and Human Services Department to approve the waivers “shortly.”

“There were no surprises for them when we submitted the plan and the questions that remain, we both know where we’re working towards right now,” Bousselot told reporters this morning at the end of the governor’s weekly news conference (find the audio here).

Last week Branstad had a conference call with Kathleen Sebelius, the secretary of Health and Human Services, to discuss the process. On Friday Branstad sent a letter to Sebelius and President Obama, asking for a personal meeting with them when he’s in Washington, D.C. on September 24 and 25.