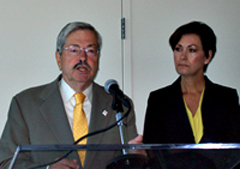 Governor Terry Branstad today said the Iowa Republican Party’s state central committee “made a mistake” this weekend by setting July 12 as the date of the 2014 GOP state convention.

“We’ve always had conventions in June as long as I can remember and I’ve been involved pretty much every one of ’em since 1968, so I think we ought to stay with the June convention,” Branstad said during his weekly news conference.

Iowa GOP leaders met this past Saturday and voted to move the convention date from June 14 to July 12. Critics say it gives Democrats — particularly likely Democratic U.S. Senate nominee Bruce Braley — another month to campaign without direct challenge from a GOP competitor.

The party’s chairman last night told Radio Iowa the date was moved to avoid holding two state conventions if the statewide canvass of the June 3, 2014 Primary isn’t done by June 14, it’s not clear if one of the GOP’s senate candidates secured the required 35 percent of the vote and there’s a need for the 2000 convention delegates to select the nominee.

Branstad told reporters this morning he “absolutely” disagrees with the party’s decision.

“We do have a crowded field of candidates for the senate,” Branstad said. “If nobody gets 35 percent of the vote, the sooner we have a convention and choose a nominee I think the better it is for the party.”

It’s no secret in political circles that the long-time Republican governor and current leaders of the Republican Party who come from the Ron Paul movement have been at odds over a number of issues. Branstad told reporters this morning he has “no idea” why the party’s state central committee moved the date of the 2014 state convention, an event that serves as the kick-off for the General Election campaign.

“I believe that it makes sense to resolve these matters as quickly as possible,” Branstad said. “The primary election is in early June. I think having the convention shortly thereafter makes a lot of sense.”

The only time in recent history the state convention was held in July was in 2008, when leaders of both parties rescheduled their June conventions due to severe flooding in many areas of the state.