You are here: Home / News / Heat wave could set an end of August record 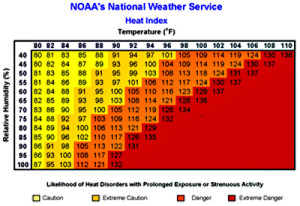 The entire state is under a heat advisory today, as temperatures are going to push up into the 90s.

National Weather Service meteorologist, Brad Small, says it’s not that unusual to see such high temperatures at the end of August.

“What is unusual is how long this is going to last,” Small says. “If we end up with how the forecast is expected to pan out, it will be the hottest end of August that we’ve seen on record for that seven-day period from yesterday through the 31st. So, it will be very unusual to see temperatures this warm for this long.”

Not only are the temperatures heating up — but for areas of the state that have had some recent moisture — the humidity is also a factor. “We’ve increased both the heat and humidity from what we’ve seen from earlier in the summer, especially recently what we saw right around the state fair,” according to Small.

“Definitely a big change in that regard, and we’ll be pushing records by Tuesday.” When you factor in the actual temperature and the relative humidity, you get the heat index. That index is expected to be over 100 in many parts of the state this week. The forecast shows just a slim chance for a little relief from the heat.

He says there may be a brief cold front dropping down on northeast Iowa around Wednesday. “That will be brief and very temporary, if it even occurs at all, and most of the state will see really little change, with highs in the 90’s at least through the holiday weekend,” Small says.

While people can turn on the air conditioner to seek relief, the crops in Iowa’s fields don’t have that option. “We’re gonna really increase things as far as the stress on the crops with the heat and the lack of moisture. Northeast Iowa is a little better off — they’ve had some rains recently — but the southwest two-thirds of the state is in drought conditions right now and it will continue to worsen,” Small says.

Polk County in central Iowa is also under an excessive heat warning for today.