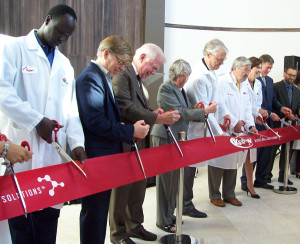 Officials cut a giant ribbon at the expanded Kemin facility.

Executives for a company with operations in 90 countries held a ceremonial ribbon-cutting this morning for its new research and development facility in Des Moines.

Matt Madison was construction manager for the $16.7 million project. More than a dozen separate labs and a test kitchen are included.

“Today, the building is occupied by nearly 60 employees,” Madison says, “almost all of whom are scientists.”

The company, which develops nutritional products for humans and animals, got state, county and city resources to help finance the project. Now that phase one is complete, Kemin’s CEO said they’ve already surpassed their promise to state officials to create 99 new jobs.

“Today, we’ve already employed 137 new jobs in the city,” Nelson said, to applause from the crowd gathered in the facility for the event. “I would make the comment that this morning we have 26 openings. Please go to the website if you think you’re sort of inspired. We’d love to take a look at your (curriculum vitae).” 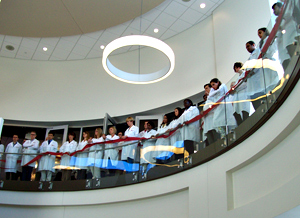 “Kemin is truly an international company, one of the most diverse workforces in the entire state of Iowa,” Branstad said. “And I just want to say that we are so proud that you have emerged as a global player that is doing so much good to help us meet the needs of feeding this growing world population.”

Kemin is a family owned operation with 2000 employees worldwide and manufacturing plants in eight countries. The next phase of its $40 million expansion in Des Moines will include offices for its new corporate headquarters.