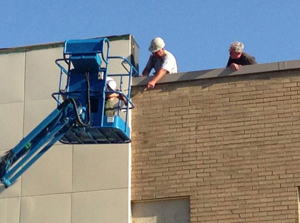 A major downtown construction project is underway in Mason City, part of a statewide program offered to all Main Street Iowa communities.

The Façade Project is funded by a $500,000 grant. Jodee O’Brien, executive director of Main Street Mason City, says restoration and renovation work started with a restaurant called SuzieQ and new windows and facings will go up quickly.

She says the contract has been signed with Dean Snyder Construction and now trailers and equipment are showing up in the downtown.

Other properties involved in the project include Brick Furniture, Encore, The Ralphs’ Garden Café Building, Rieman Music, The Quarry, Lillian’s, Schulting Real Estate, The Candy Bar and Ransom’s. O’Brien says crews will be working on most of the properties simultaneously.

She says they’ll work on changing the faces of as many properties at one time as possible, starting with Brick and working toward the plaza. The businesses, as part of the program, are putting up a 10-percent match toward the cost of the project. The goal is to have all work complete by November.