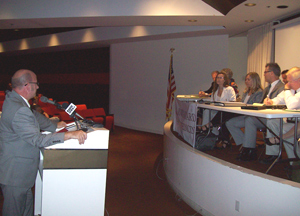 Dr. Tom Ross speaks to the Iowa Board of Medicine.

A member of the Iowa Board of Medicine has publicly challenged the chairman of Planned Parenthood of the Heartland’s board of directors to a wager over the standards of care for women who get so-called “tele-med” abortions.

The confrontation happened during this afternoon’s three-and-a-half hour public hearing over rules that would ban doctors from prescribing medication abortions via a video-conferencing system.

Iowa Board of Medicine member Dr. Bob Bender argued with Dr. Robert Shaw who’s chairman of Planned Parenthood’s board over whether a doctor rather than a certified medical assistant should conduct a hands-on exam of the patient before a drug is dispensed.

Shaw replied: “And your question of me and my response to that is irrelevant to this issue.”

Bender shot back: “So I will write down here that you refused to answer.”

The Board of Medicine will meet Friday to vote on the proposed rule. Bill Burke, a retired doctor from Des Moines, told the board he was “embarrassed by” the board’s conduct and its proposed rule.

“Please, make the decision based not on your personal prejudice and not only your religious beliefs and not on political pressure — whether it’s subtle or not so subtle, but make it based on the evidence,” Burke said.

Jeanine Freeman of the Iowa Medical Society told the board doctors worry this rule will throw other tele-medicine practices into doubt.

“We think the rule, as you have it today, is premature,” she said, “that more analysis, more evaluation, more study, more discussion with the profession is important.”

An abortion opponent who spoke at the hearing hopes the board adopts the new restriction, Planned Parenthood sues and a judge then could rule all abortions in Iowa are illegal. Donna Holman of Keokuk called tele-med abortions “irresponsible medicine.”

“The Board of Medicine needs to address the personhood and the humanity of the child in the womb,” Holman said.

Elizabeth Heying, a lawyer from the Dubuque area, urged the board to adopt the rule because many abortions are performed on women under the age of 25.

“Girls and young women may simply not have the cognitive ability to rationally assess for themselves the risks, hazards and potentially serious consequences of abortions and web-cam abortions,” Heying said.

Natalie Scarpino of the Crisis Intervention and Advocacy Center that serves 10 counties in southwest Iowa said the rule will hurt rural Iowa women who’ve been victims of rape and incest.

“Tele-medicine is often the only way rural women can access quality and timely health care,” Scarpino said. “…It would be a disservice to victims and women in Iowa to discontinue this service.”

Eight of the 10 members of the Iowa Board of Medicine voted in late June to proceed with a proposed rule that would ban what critics call “web-cam abortions.” The restriction was drafted in a petition about a dozen doctors and other health care professionals submitted to the board a few days before its meeting.

AUDIO of first half of hearing, opening with comments from Dr. Tom Ross who performs medication abortions for Planned Parenthood, runs 1 hr 21 minutes.

AUDIO of second half of hearing, opening with comments from Kelly Larson of InnerVisions HealthCare, 1hr 30 mins.