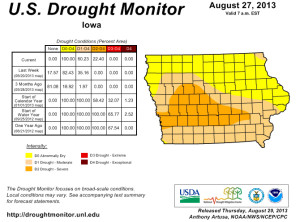 Click on the drought map to make it larger.

The recent hot and dry spell has prompted the U.S. Drought Monitor to list nearly a quarter of Iowa in “severe drought.” A week ago, none of the state was in that category.

State Climatologist Harry Hillaker says it’s clearly very dry across Iowa, but he disagrees with some of the U.S. Drought Monitor’s new assessment.

“Right along the Nebraska border, there was actually a fairly good rain there about a week-and-a-half ago. So, I would have left out Harrison and Pottawattamie Counties (from the severe drought category). They’re still plenty dry, but certainly not as dry as the rest of that area,” Hillaker says.

In far northeast Iowa, a section of Allamakee County is labeled as being in “moderate drought.” Hillaker believes that area shouldn’t be listed in that category just yet. Overall, the U.S. Drought Monitor calls all of Iowa at least “abnormally dry,” compared with 82 percent last week.

Sixty-percent of Iowa is in moderate drought and 22.4 percent is in severe drought. Hillaker says the lack of moisture and this week’s extreme heat will likely hurt the development of Iowa’s corn and soybeans.

“The worry with most of the corn and soybeans is it’s going to decrease the yield and the corn kernels themselves won’t fill very well with the lack of moisture, which is going to be worsened by the heat…same with the beans,” Hillaker says. This month is on track to enter the record books as Iowa’s 7th driest August.

“The only ones lower were all a long time ago with 1947 being the most recent one. The other two were back in the 1800s,” Hillaker says.

The dry spell, which started back in June, follows Iowa’s wettest ever spring. Over the months of March, April, and May, Iowa received a statewide average of nearly 17.5 inches of rain. That was over two inches above the previous record, which was set in the spring of 1892.