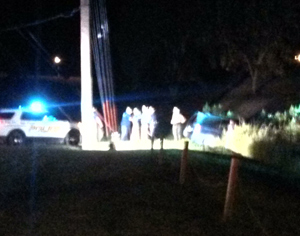 Investigators at the scene of a fatal accident in Cass County.

An accident in southwestern Iowa’s Cass County last night claimed two lives. The accident that resulted in the deaths of  86-year-old Lenard and 83-year-old Annabel Schroder,  happened in Atlantic, just before 10 p.m.

It occurred on a curved road leading to the Cass County Memorial Hospital’s Emergency and Rehabilitation Services entrance off of east 10th Street.

A van with the two occupants appeared to have gone over an embankment and crashed into a tall grass ravine. The victims were not wearing their seat belts.

The crash remains under investigation, and the names of the victims were being withheld pending notification of relatives.

Additional details are expected to be released later this morning.