You are here: Home / Health / Medicine / Board of Medicine votes to ban “tele-med” abortions in Iowa (AUDIO) 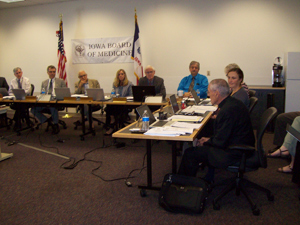 Monsignor Frank Bognanno, (on right), speaks to the board.

The Iowa Board of Medicine has given final approval to a rule that will forbid Planned Parenthood of the Heartland from prescribing medication abortions via a video-conferencing system.

“This is a big deal,” said Monsignor Frank Bognanno, a public member of the board. “This isn’t like taking an aspirin.”

The majority of the board’s members argued the best standard of care for women seeking an abortion is to have a doctor do a physical exam and talk face-to-face with the patient.

Bognanno said he’s concerned certified medical assistants have been doing some of the ultrasounds and physical exams before the remote video conference with a doctor.

“I’m thinking: What’s wrong with this picture? I mean is this standard of practice? I mean, this is Iowa. This isn’t Tanzania, you know,” Bognanno said. “What’s going on here?”

Dr. Greg Hoversten of Iowa City, the board’s chairman, opened the board’s nearly hour-long discussion of the issue by indicating he would vote for the ban.

“How can any of us possibly find that a medical abortion performed over the internet is as safe as one provided by a physician in person, at the bedside?” Hoversten asked.

Eight members of the board voted to adopt the rule. Two members voted against it. Ann Gales, a lawyer from Bode who is a public member of the board, argued for “more examination” of the issue.

“I’m concerned about kind of the reputation of our board…and a lot of people have a concern that we’re rushing to this,” she said. “If this is the right rule, it will still be the right rule after we engage in a more thorough discussion.”

AUDIO of board discussion, runs 48:37

Based on state government’s rule-making process, this ban on so-called “tele-med” abortions could take effect in early November. However, a lawyer for Planned Parenthood told reporters after the board’s decision that “all options are on the table,” and that includes legal action to try to prevent the rule from taking effect.