You are here: Home / Sports / Triathlon organizers plan for the heat 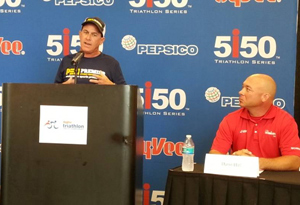 Safety will be a top priority at a host of sporting events taking place this weekend across Iowa.

Officials have ordered extra water bottles and made other changes to help fans deal with the extreme heat at football games tomorrow in Iowa City and Ames.

Meanwhile, in Des Moines, hundreds of kids, Olympic athletes, and amateurs will be competing in the Hy-Vee Triathlon this weekend.

Darin Hirl, director of sports marketing for Hy-Vee, says several precautions will be in place for both fans and athletes at the “hub” of the event — Gray’s Lake Park.

“We’re going to have 10 hydration stations throughout Gray’s Lake with over 22,000 pounds of ice and 20,000 bottles of water,” Hirl says. “Any spectator, athlete, or volunteer can stop by and make sure they are well hydrated for this weekend.”

Race director Bill Burke says athletes will not only be dealing with hot air temperatures, but also warm water. The temperature of the water in Gray’s Lake today was 81 degrees.

“We’ve made the decision and we’ve done this at several of our events across the United States…at the Nation’s Triathlon last year, the water temperature in the Potomac (River) was above 84 degrees. When that happens, we do not allow athletes to even wear wet suits because the water temperature is so hot it’s unsafe,” Burke says.

“That’s what will happen this weekend should water temperatures be above 84 degrees in Gray’s Lake.” Around 1,400 kids will race on Saturday, while up to 2,700 amateur and professional athletes will run, swim, and bike on Sunday.