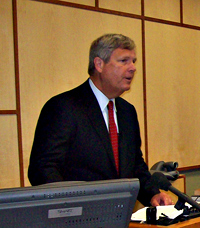 “Agriculture depends to a great extent on immigrant labor,” Vilsack said. “…The sad reality in America today is that there are farmers throughout the United States who are now making decisions not to harvest what they planted because they simply do not have enough hands to conduct the harvest.”

Under the immigration reform bill that cleared the Senate, Vilsack’s agency has the authority to help manage the labor supply for U.S. farms by approving more “guest worker” applications.

The USDA today projected both agricultural exports and net farm income will set records in 2013.

“That’s obviously positive news for producers and for people who are associated and connected to agricultural trade,” Vilsack said. “But there are some serious challenges to the future of American agriculture and two of those challenges require congressional action.”

The first is passage of a five-year Farm Bill and the second, according to Vilsack, is passage of comprehensive immigration reform.

Wendy Wintersteen, dean of Iowa State University’s College of Agriculture who was one of four panelists, said her school has difficulty in getting green cards for the “best and brightest” they hire from another country to serve on the ISU faculty.

“Right now immigration is just now accepting adjustment of status applications from our junior faculty members born in China whose immigrant petitions were approved in February of 2008 — so five years later,” Wintersteen said. “And so in that time period there’s doubt, there’s concern, there’s other paperwork that has to be maintained and updated.”

According to Wintersteen, Iowa State University IT specialists who were born in India have been waiting for nearly 11 years to have their green card applications approved. An executive from Pioneer, the head of the state’s largest chamber of commerce and an Iowa dairy farmer also spoke at the forum.

AUDIO of remarks from Wintersteen, Vilsack, 18:50