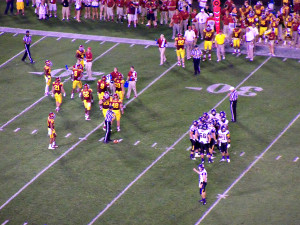 Northern Iowa scored first and then held off every Iowa State attempt to take the lead in downing the Cyclones 28-20 at Jack Trice Stadium in Ames Saturday.

Panther running back David Johnson scored all four UNI touchdowns, on two runs and to receptions.

“I’m just so excited that we came out on top of Iowa State after what happened two years ago,” Johnson said after the game.

The game two years ago was a close loss, and Johnson had left the door open for a repeat of that after fumbling the ball back to the Cyclones on the one yard line as he was heading into the end zone late in the game.  But this time the Cyclones couldn’t pull it out. 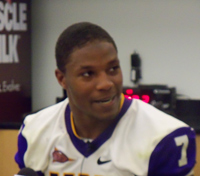 David Johnson rushed for 199 yards and scored 4 touchdowns against ISU.

The fumble meant Johnson finished the night one yard shy of 200. He said the first 37-yard run that put them ahead was the key play.

“It was very important for our offense, with us being so experienced, we wanted to come out and dominate in the first half and show them that we are a good team — a good offense,” Johnson said.

Johnson said the team is also motivated by last year’s season that ended with a losing record after some close loses.

“After last year’s season we had that bitter taste in our mouth after going 5-6 and it was a long offseason,” Johnson explained. “We had a lot of time to think about it and work hard in the offseason.”

Linebacker Jake Farley led the team with 12 tackles. Farley’s dad is the coach, and he talked about the importance of beating the Cyclones.

“It’s big, I’ve been on the sideline for a couple of these games growing up. I was down there when we won in ’07 and this week I even pulled the YouTube video and watched it just to get that feeling to see what it would be like if we won this one out and we did. It was a huge win and I think it will be a happy household tonight,” Farley said.

Farley’s dad, the coach agreed. “It doesn’t matter if it was last year, 10 years ago or 15 years ago, all that matters right now is we came out here –we have a new team, you can call it a newer team — I just wanted them to represent our university the way we want it to be represented with how hard we played,” Farley said.

Farley says recruiting battle for David Johnson, a native of Clinton, came down to the Panthers and Illinois State — and he’s glad they ended up with him.

“David is awesome, he should have had 200 (rushing yards) if he would have fell in the endzone, he’d have five touchdowns,” Farley laughed.

“David is exceptional, but what really pleased me tonight was the line blocking. I thought our offensive line was tremendous. I did not know if we could control the line of scrimmage, you talk like you want to, but I didn’t know if we could do this against this team. But they did it, and they did it consistently all night long.” Farley says he was also pleased by the relatively error free game the team played. He says that’s because of their attitude.

“They are invested because they want to do it, they are invested in how they stayed this summer, what they did. And when you put all that effort into it, I think when it comes down to those crucial plays they tend to fall your way. That’s something that we talked about, but there’s a lot of truth to it, that’s not just talk,”Farley said.

Cyclone coach Paul Rhoads credited the Panthers for the way they played the game. “They had an outstanding game plan on both sides of the ball, thoroughly knew our offense and defense and took advantage with great execution of all those holes and weaknesses, great execution, especially in game one of the season,” Rhoads says. “They did that with talented players, certainly at quarterback and the running back position.”

Iowa State quarterback Sam Richardson started the game well, but had trouble rallying the Cyclones late under heavy pressure. Rhoads said there were a lot of positives in his play.

“The no interceptions are big, the completion percentage was close to two-thirds as he went through it. We had some lapses in the second half when we were trying to take advantage of that efficiency when we didn’t protect him,” Rhoads says. He says they have to look at the film to see if there was poor execution in the second half, or if they didn’t provide enough protection for Richardson.

Iowa State has the week off before facing Iowa at home in two weeks. Rhoads said it doesn’t put any more importance on the game because they lost the opener.”Every game is important. That’s why when asked the significance of this game over that game, there is none. Every game is extremely important,” Rhoads said.

“Right now we are one in the hole and we’ll worry about the next one and try to get a victory.” Northern Iowa has another game against an in-state team Saturday as they host Drake.