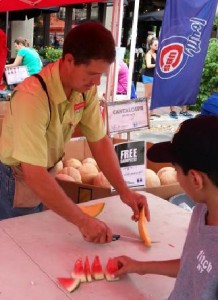 Much like sweet corn, Iowa grown watermelons and cantaloupe are arriving later than usual this year. The wet spring prevented most producers from planting their crops at the usual time.

Daniel Zimmerman operates Stillwater Greenhouse near the town of Orchard in northeast Iowa’s Mitchell County. He sells watermelons and cantaloupe at farmer’s markets in Des Moines, Waterloo, and Cedar Rapids. “The biggest challenge this year was getting the plants planted in the field, until it dried up. We’re definitely two to three weeks later than we usually are,” Zimmerman says.

Melons grown in the state are just now hitting their peak for tastiness, according to Zimmerman. “Normally, our melons would hit around the first part of August,” Zimmerman says. “The flavor is going to be good. The heat in the last couple weeks is going to be great for them.”

Under ideal weather conditions, watermelons and cantaloupe mature to full sweetness in about four months of warm weather. Zimmerman has learned a few tricks to growing flavorful melons in Iowa. “Growing melons in Iowa can be a challenge, especially if the spring is really wet and we don’t get the hot summer days,” Zimmerman says.

“That’ll definitely keep them from maturing…or will slow (maturation). Every time we get an 80-degree week or better, that’s usually great from watermelons. Usually the sandy soils along the river bottoms are better.”

Harvesting watermelons before they’re ready will result in less flavor. Zimmerman says you can test the ripeness of a watermelon by thumping it. A “dull” noise sounding back means that it’s ready to eat.