You are here: Home / News / Cicadas provide the sounds of summer (Audio) 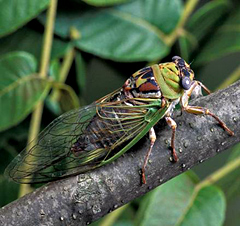 Next to Fourth of July fireworks, perhaps one of the loudest “sounds of summer” has arrived.  Radio Iowa’s Pat Curtis reports:
Audio: Cicada  report. :55

It’s the annual singing of the cicadas. Iowa State University Entomologist Donald Lewis says there are three cicada species common to Iowa and they can be heard between noon and dusk.

Meanwhile, a cicada species that only appears every 17 years is expected to emerge again next June in areas central and southeastern Iowa.

“We are not hearing periodical cicadas this year, but like every summer, we are hearing the annual cicadas,” Lewis says. Another insect, similar to the cicada, is also singing it’s tune. Katydids start making noise right around sunset. 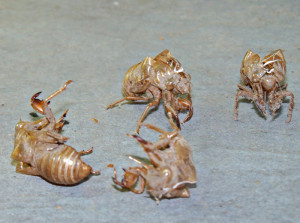 The shed shells from Cicadas can be found on trees.

“With the warm temperatures of late August, the katydids just went nuts in my neighborhood,” Lewis says.

“The male katydids sing high in the trees…almost all night long.” The cicadas have just a few short weeks in the summer to find a mate and successfully pass on their genes, so the insect will soon go silent for another year.

“They’ve done what they needed to do,” Lewis says.

The hollow shells of cicadas are commonly found stuck to trees. Lewis says katydids will hang around through October.

Here are some Cicada sounds: