You are here: Home / Human Interest / Historic B-17 bomber flies over northwest Iowa 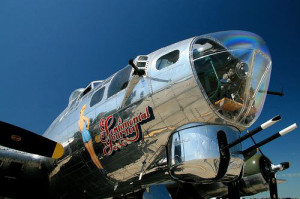 MidAmerican Air and Transportation Museum photo of the B-17 Sentimental Journey.

Residents of northwest Iowa are learning what it was like to fly in a World War Two bomber this week.

Flights on a B-17 Bomber are being offered at the Mid America Air and Transportation Museum.

“It was built to perform at high altitudes, so a lot of times it has very heavy controls down low. That’s fun for us. We get a chance to do it when we’re not being shot at, we’re not wearing big bulky clothing, and we’re not way up high,” Scholl says.

“It’s kind of a relic of a bygone era…no powered control.” The B-17 Bomber in Sioux City is called “Sentimental Journey” and features a pinup picture of Betty Grable.

In addition to two pilots, a bombardier, a radio operator and five gunners — a B-17 could hold 13 machine guns and a hefty bomb load.

“Five-thousand pounds on a typical mission and up to about 8,000 pounds for a short range mission,” Scholl says.

The guns only had around 600 rounds each, or about a minutes worth of firing time, so the gunners had to make the most of the limited ammo. Shelby Bolke, also with the Commemorative Air Force, says she’s honored to travel with “Sentimental Journey” around the country and pay tribute to World War Two veterans.

“The reward is the veterans you get to meet,” Bolke says. “They’re dying at the rate of 1,500 a day, so this is not to just honor the flyers, this is to honor that generation.”

While 12,573 B-17s were used in World War Two, only 10 functional planes are left today. Flights on the B-17 will be available for purchase through Sunday at the Mid America Air and Transportation Museum. Tickets to tour the plane are $10, but a ride on the plane costs $425.