You are here: Home / Military / Braley “leaning against” military action against Syria (AUDIO) 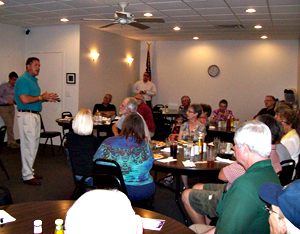 Bruce Braley speaks during a campaign visit to Adel.

“I’ve been getting feedback as I travel around the state of Iowa,” Braley told Radio Iowa today.

“It’s on everyone’s mind and it’s something that there seems to be some fairly clear consensus about, which is that Iowans are extremely reluctant to get drug into another conflict in the Middle East and are worried that initiating military action against Syria could inflame conflict in the region and bring us into a broader engagement.”

Braley said it’s “clear war crimes were committed” and the international community needs to hold Syria’s dictator responsible, but “there are ways to do that without military intervention,” according to Braley.

“I’m not going to support any action until I know that it is in the best, long-term interest of the United States and that bar for that support is very high right now,” Braley said.

In the summer of 2011 Braley voted against U.S. military action against Libya’s dictator, saying the U.S. could not afford it. During an appearance today in Adel, Braley said he “fears” the U.S will be “drug into a long-term conflict” in the Middle East if the U.S. goes ahead with military strikes into Syria.

Braley was asked about Syria today during a stop in Adel organized by his U.S. Senate campaign.

“Clearly based on the personal feedback I’m getting and what my staff is receiving, it is overwhelmingly opposed to U.S. military action in Syria at this point,” Braley said during the interview with Radio Iowa.

On Monday, Braley returns to Washington where he plans to review classified documents available to members of congress and attend a classified briefing.

Republican Congressman Tom Latham is likely to vote against a military strike against Syria. Latham told Radio Iowa last Thursday that the president hasn’t yet convinced him the U.S. should be injecting itself into Syria’s civil war. Democratic Congressman Dave Loebsack has said the U.S. can’t go it alone and, if there is a military response to the chemical weapons attack in Syria last month, it should be an international coalition that acts. Republican Congressman Steve King told The Omaha World Herald it appears to him President Obama is intent on killing Syrians to convince Syria’s president to stop killing Syrians.