You are here: Home / News / Governor heading to India for first time on trade trip 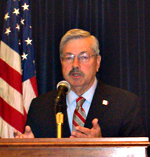 Governor Terry  Branstad is making his first ever trip to India, where he’ll promote Iowa agricultural services such as farm equipment and biosciences. Kemin Industries, John Deere, and other Iowa employers already have facilities in India.

Branstad says the nation also knows about Iowa native son Norman Borlaug. “Of course, Borlaug played a key role over there in developing wheat to avoid starvation,” Branstad said. “He’s a big hero over there, so it should be an interesting trip.”

The Governor left on the Asian trade mission today. The itinerary includes time in Japan, but Branstad is especially interested in expanding opportunities for Iowa businesses in India. “Their population is growing. They’re going to, in the not too distant future, surpass China in terms of their population. Their economy is growing at a much higher rate than ours and they have a growing middle class. There’s a lot of opportunity,” Branstad said.

While in India, Branstad will visit the facilities for Kemin Industries, John Deere, Fisher Controls, and Rockwell-Collins. The governor will also meet with the U.S. Ambassador to India, Nancy Jo Powell, a Cedar Falls native and University of Northern Iowa graduate.