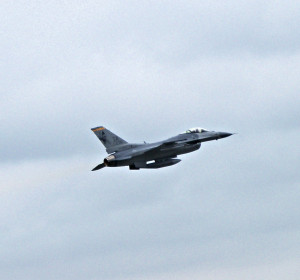 The Iowa Air National Guard marked the end of an era this weekend as  manned flight is coming to an end for Iowa’s last F-16 fighter squadron.

Since 1941, the air wing headquartered in Des Moines has gone to war in nearly a dozen different aircraft. Now the squadron is transitioning to remotely piloted aircraft, or RPA’S.

Lieutenant Colonel Trenton Twedt commands the maintenance squadron, and helped organize Saturday’s ceremony. “I think the big thing is we know that manned flight is coming to an end here at the 132nd Fighter Wing and let’s just celebrate the end of flying and move this celebration right into the new mission and kick it off with a good jump start,” Twedt said. 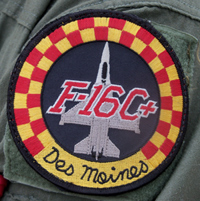 One thousand members of the 132nd Air Wing, former aviators and VIPs gathered in the unit’s massive hanger at the Des Moines Airport for the ceremony. Command historian, Brandon Cochran, said the 72 years of manned flight spanned prop-driven biplanes, to the jet propelled F-16 fighters.

“Even from our early days of 1941 here at what was the dirt strip at the Des Moines Airport, we only had 1.250 flight hours before we went to World War Two and ended up the war as one of the best replacement units in the United States,” Cochran explained. 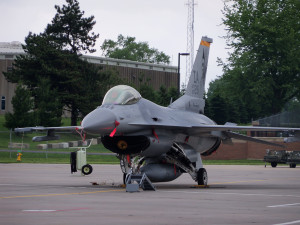 Pilot Shawn Tapps is already trained to stay with the unit’s and begin the new mission of flying remotely piloted aircraft.

“Sad to see the manned fighter go away, being an F-16 guy. It was a blast to fly, loved every moment of it,” Tapps said, “however it’s an exciting opportunity for the wing and the state to get a foothold in where the future is going.”

The ceremony closed with the final scheduled training mission, as three F-16s simulated a bombing attack, followed by the theme song from movie Top Gun. Dozens of grateful civilians set up lawn chairs outside the air base to watch the last scheduled training flight.

The spectators included Matt McVicar and Gus Workman. “I don’t work too far from here. So I can hear ’em going out whenever they go out to the west I hear them go over my head. I’m going to miss hearing that, sorry to see it go,” McVicar said.” They mean freedom for all of us, pride yea, Should mean just about as much as our flag does,” Workman added.

The F-16’s have been flying out of the Des Moines base for the final time to land at guard bases in other states. The last eight jets will be gone by next month. The only F16 remaining is the one on display at the outside gate of the air base along with the displays of the other planes that have been flown by the unit.