You are here: Home / Business / Waterpark near Williamsburg shut down by the state 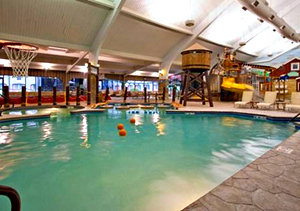 The Clarion Inn website has this picture of the Wasserbahn Waterpark.

The Iowa Department of Public Health has shut down an indoor waterpark located in an eastern Iowa hotel. The agency’s Carmily Stone says the Wasserbahn Waterpark at the Clarion Inn near Williamsburg has repeatedly been cited for poor water quality and inadequate record keeping.

“They have been failing to properly chlorinate the swimming pools and slides…and conduct proper testing and record keeping at the facility,” Stone says.

The Johnson County Public Health Department initially inspected the facility following a customer complaint in March, but Stone says the owners of the waterpark “failed to comply with several corrective action plans.”

The waterpark is now closed and won’t be reopened until the owners comply with conditions outlined in an agreement with the Iowa Department of Public Health. Stone says the owners, in order to reopen the waterpark, must have a comprehensive facility audit done by an engineering firm, repair or replace all equipment in need of improvement, and contract with an outside pool management company to provide oversight, direction, and technical assistance.

A proposal to close the waterpark was initially filed in June, but the owners appealed that proposal. Stone says the Department of Public Health has not been made aware of anyone becoming sick after being at the waterpark.

The owner/operator of the hotel and waterpark is identified as Young Kim.