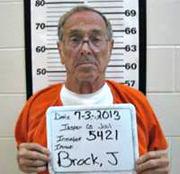 A 72-year-old Newton man is now facing federal charges for allegedly video taping naked children, teens and adults who visited his home. James Wiley Brock was originally arrested in early July when local authorities discovered Brock had hidden cameras in areas where visitors would undress to use a tanning bed or swimming pool at his home.

Newton Police Chief Jeff Hoebelheinrich says they were tipped off by parents whose children had been to Brock’s home. “He had numerous cameras throughout the house, in the bathroom and a couple other places,” Hoebelheinrich said.

Police have been trying to identify and notify victims. Hoebelheinrich said “well over 1,000” VHS tapes and DVDs seized from the home show people undressing in Brock’s home. The home is located next to a church. A neighbor said Brock moved into the home six or seven years ago.