A group pushing to expand the number of women elected to political office in Iowa has honored a woman who’s been elected to a top religious office. The Most Reverend Katharine Jefferts Schori is the first woman to be elected the presiding bishop of the worldwide Episcopal Church.

“I’m absolutely delighted to be able to assist in this kind of initiative,” she said during a news conference late Tuesday afternoon in Des Moines.

Jefferts Schori received the 2013 “Equity for Women” award from the Iowa-based “50-50 in 2020″ group pushing to get women elected in Iowa. Former State Senator Maggie Tinsman of Bettendorf is a leader of the 50-50 in 2020 group and Tinsman told reporters Jefferts Schori was chosen because she’s shown a woman can be successful in a male-dominated profession.

Schori, who is 59, started her professional life as an oceanographer.

“The first year I was in graduate school I was assigned to go on a research cruise and I was told that this was the first year that women were permitted to go to sea overnight,” Jefferts Schori said. “And the first time I was chief scientist on a cruise, the captain wouldn’t talk to me.” 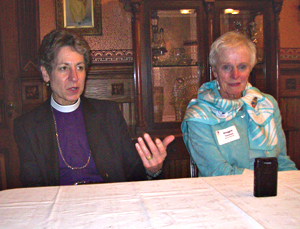 Women have been ordained as priests in the Episcopal Church since 1977. Jefferts Schori, who was ordained in 1994, said it was “really hard at the beginning” for the female pioneers in the priesthood, but once about a third of Episcopal priests were women, the “culture” of her church shifted to be more “welcoming for all.”

“When I was ordained there were a couple of older women in my parish who came up to me and said, ‘We don’t believe in women priests, but you’re o.k.,'” Jefferts Schori said. “It’s often encountered somebody — a living human being — who represents that expectation or that fear that helps people get beyond that.”

Women need to be willing to take risks, according to the bishop, because being a leader in religion or politics is “always about change.”

The bishop is chief pastor to more than 2.4 million Episcopalians in 16 countries. She spoke last night to a crowd of about 100 at a fundraiser in Des Moines for the 50-50 in 2020 group. One of the group’s goals is to have half of Iowa’s legislators be female by 2020, which is the 100th anniversary of the year women got the right to vote.