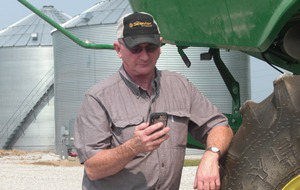 Joe Hossel checks on his farm via his phone.

A southwest Iowa farmer is one of the first to adopt “smart-farm technology” that allows him to manage most everything on the farm from his smart phone.

Joe Hossle says hooking up his farm near Emmerson to the technology is an ongoing operation. “We started adapting that approximately a year ago and we’ve been adding and adding and adding ever since. There’s more apps it seems every day,” Hossle says. “We have an app for the water in the house — the water flow — the electrical current situation in the house, the temperature controls, whether it gets too warm or too cold in the house.”

The temperature is also controlled in his workshop, and he’s hooking up his grain bins to monitor them. “We’re going to put an app on there and a put device on there to monitor the heat within the bin and the moisture of the grain that’s in the bin. Of course, we have our surveillance cameras — which are well worth their weight in gold actually — just being able to look and see what’s going on in the farmstead, whether I’m here or in Minneapolis, Minnesota visiting my son,” Hossle says.

He can also monitor feed levels for livestock, door locks and fuel tanks. An official with Iowa LinkedUP says the smart farm technology will be available in many other parts of the state in the coming months. The official says the extension of fiber-optic cable in rural areas of the state and increased broadband coverage through new cell towers has made the system possible.

Hossle has an agreement with Iowa Network Services for the technology. It costs between 5 and $6,000 to install, but Hossle says the security the system provides is well worth it. “I feel very at ease whether I am two miles away or 200 miles away, or I could undoubtedly be two-thousand miles away and feel secure,” Hossle says.

Hossle made his comments at a recent demonstration of the smart-farm technology at his farm.