You are here: Home / Education / Astronaut Clay Anderson returns to ISU to teach 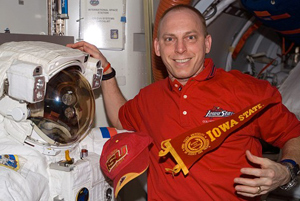 One of Iowa State University’s out-of-this-world graduates is returning to Ames to teach. Clay Anderson got his master’s in aerospace engineering at ISU in 1983. The Nebraska native went on to become an astronaut and served two missions aboard the International Space Station.

Combined, he spend 167 days in orbit and 38 hours doing E-V-As or extra vehicular activity, NASA-speak for space walks. With the space shuttle fleet retired, Anderson, too, retired from the astronaut corps in January.

The 54-year-old starts work at his new job at Iowa State as a distinguished faculty fellow next month, teaching freshmen about aerospace engineering.