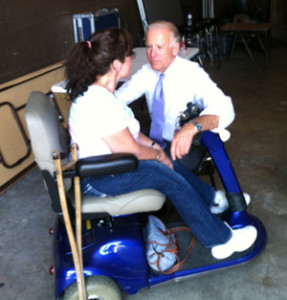 Biden came to Iowa in 1987 to run for president, then again in 2007. Over the years he’s kept in touch with a broad network of Iowa contacts.

“I first got connected with him when my son Paul…went to the airport with someone to pick Senator Biden up and he called me on the phone and said, ‘Oh, mom. You’ve got to support this guy, Joe Biden. He’s just wonderful,'” Bukta recounted during a telephone conversation with Radio Iowa. “So after that I met him and I agreed with my son. He was just great. He’s so friendly and upbeat. I just like everything about him.”

Bukta endorsed Biden a few weeks before the 2008 Iowa Caucuses.

“I’m not going to say the vice president’s my friend, but he’s been like a friend to me over all these years,” Bukta said, laughing. “…He’s such a people person and such a kind man.” Seve

Jim Lykam of Davenport was the first legislator to endorse Biden in 2007.

“I got to know him. I chauffeured him around a few times where it was just me and him,” Lykam said during an interview with Radio Iowa. “He is a very, very genuine person. I mean, I’m very glad I got to know him.”

Biden occasionally calls Lykam to maintain that connection. Biden exchanges letters with Paul Heddens of Ames, a teenager who is the son of State Representative Lisa Heddens.

“My son, Paul, has an intellectual disability and really formed a fondness and a relationship with the vice president, so much so that the vice president has called him for his birthday before,” Heddens told Radio Iowa.

“He called her like the next day and said he was so sorry that her husband died and that he had gone through that and that he would really like to have a private conversation with her, face-to-face, and see what he could do to help her because someone did that for him when his wife died,” Connie Gronstal told Radio Iowa, “and he felt he should help other people that have that same situation.”

“You know I’ve been around a lot of politicians,” the wife of the state’s most powerful Democratic legislator said, laughing, “and people are supportive and nice and remember names and details, but they aren’t quite as caring about you as he is.”

If Hillary Clinton runs in 2016, some party activists believe others — including Biden — would not, but Representative Lykam — one of the earliest Biden supporters in Iowa — said Biden’s appearance at Sunday’s Steak Fry will “fuel the fire” of speculation.

“The vice president’s been around long enough to know that you never say never,” Lykam said. “…He’s definitely out there.”

Heddens said she and her husband hope Biden gives “strong consideration” to running for president in 2016.

“Coming to the Harkin Steak Fry, that oftentimes is a little bit of an indicator of someone at least exploring the possibility,” Heddens said. “…I think he brings a lot to the table, a lot of knowledge to the table and at this point, you know, if he were to announce he’d run we would probably continue to support him.”

Biden will be making his first solo appearance at the 2013 Harkin Steak Fry on Sunday. Biden spoke, along with five other presidential candidates, at the 2007 event which attracted a crowd of 15,000. At the 2003 Harkin Steak Fry, about 12,000 people turned out to see former President Bill Clinton speak after the field of 2004 presidential candidates addressed the crowd.