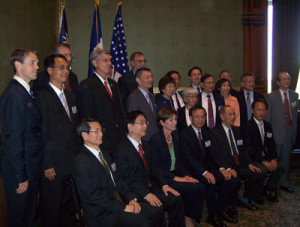 Iowa’s lieutenant governor and representatives of Taiwan’s government gathered for a statehouse ceremony this morning to commemorate the sale of up to $4 billion of U.S. commodities to Taiwan.

Wen-Deh Chen — the vice minister of Taiwan’s Council of Agriculture — said the U.S. supplies about one-fourth of the food imported to the island nation.

“But we need to further strengthen economic ties between our two countries,” Chen said.

Iowa established a “sister-state” relationship with Taiwan in 1989.

“And we have a strong history of economic, agricultural and cultural exchanges and cooperation,” Chen said.

Lieutenant Governor Kim Reynolds got a warm response from the delegation of Taiwanese who attended the ceremony when she said “thank you” in their language.

“We truly and sincerely appreciate the partnership. We look forward to building on that and to continue to work together for the mutual benefit of both our people. Xie, Xie,” she said. 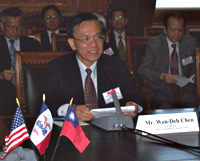 The Taiwanese leaders signed agreements with representatives of the Iowa Corn Growers Association and the Iowa Soybean Association, outlining Taiwan’s purchase U.S. corn, soybeans and distillers grains — a by-product of ethanol production that is fed to livestock.

Taiwan is our sixth-largest US export market for both corn and soybeans and you are such an important partner to our state, to our people and to our future,” Reynolds said. “At events like this we are not only signing contracts for the purchase of Iowa corn, soybeans and DDGs, but we are really highlighting the importance of how Iowa farm families have a partnership with the people and the families of Taiwan.”

Chen — who is also the head of Taiwan’s 2013 “Agriculture Trade Goodwill Mission” to the US — expressed hope Taiwan can be included in the “Trans-Pacific Partnership” free trade agreement being negotiated by the US and a dozen Pacific Rim countries. Over 23 million people live in Taiwan. It’s main island sits off the southeast coast of mainland China.