You are here: Home / Fires/Accidents/Disasters / Woman survives rollover accident without seatbelt on 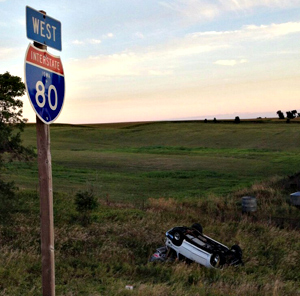 Authorities always tout how seat belts save lives, but a woman’s life may have been saved this morning by her not wearing a seat belt. Susan Herman, of Cedar Rapids, hit a guard rail on Interstate 80 in southwest Iowa’s Cass County. The SUV rolled and Herman was thrown clear.

Cass County Chief Deputy Sheriff John Westering is still looking into the cause of the crash.

“We’re unsure why she went into the guard rail,” Westering says. “She was in the inside lane, the left lane, went into the right lane and just kept going over onto the shoulder where she came into contact with the guard rail cable and got tangled up in that. It spun her around several times and eventually the vehicle rolled down into the north ditch. That’s where she was ejected.”

Herman was conscious and breathing when rescue crews and law enforcement arrived. She’s being treated at a hospital in Omaha. Westering said Herman had not been wearing a seatbelt, but in this case, her being ejected may have resulted in less serious injuries. The roof of the Explorer was crushed during the rollover, he says, and likely would have resulted in more serious trauma or even death.