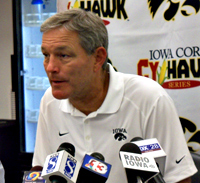 The Iowa Hawkeyes pulled out to a 13-0 halftime lead and then held off every rally to hold the lead and get a 27-21 win over Iowa State Saturday in Ames. The Cyclones scored with 5:28 to go in the third quarter to make it at 13-7 ballgame, but Iowa responded with a nine-play 60-yard scoring drive.

It swung the momentum right back to Iowa, and Hawkeye coach Kirk Ferentz says that was a key point in the game. “It was a great response…for the offense to answer like that, that’s part of the growth process and we still have a lot of growing to do obviously. We need to learn how to close things down here, but that’s part of the growth and I was really happy with the way the guys did that,” Ferentz says.

Iowa State made a late rally and had the ball with seven seconds left in the game, but couldn’t get a miracle play to win. Ferentz was pleased to see his team hold on and be able to take the trophy home for winning the game. “We haven’t seen it in two years and they don’t give them away. We knew they would fight like they did, ” Ferentz says, “you’ve got to earn it and the guys did a great job and handled the environment, which was no easy task, and finished the game which was great to see.

It’s his first win in the series.  “A great win, great win on the road. We really wanted that trophy back, it’s an instate rivalry, they got us the last two years — so it was great to celebrate with my teammates in the lockeroom,” he says. 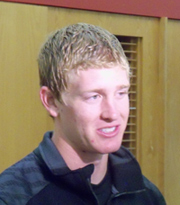 Iowa quarterback Jake Rudock agreed. “It’s just a great thing to happen, we’re always trying to win the game, I mean that’s the bottom line, that’s why we play this,” Rudock says. “Going on the road definitely is a big, big, thing — especially against the Cyclones. They are a really good team, they put up a good fight. Coming away with the W at the end of the night is just a really good feeling.”

Cyclones coach Paul Rhoads was pleased with the way the team finished the game when it looked like they were out of it. “They could have folded it in and let this game turn into a rout. And we played it to the final play and had an opportunity with one play to pull out a miracle victory that obviously we came up short on,” Rhoads says.

He says they made too many mistakes to win Iowa did a good job of playing sound football and keeping the ball away from them and “earning the victory tonight.” Iowa State is now 0-2 and off until September 26th when they travel to Tulsa. Rhoads says they will have a challenge to get ready with so much time between games.

Rhoads says they will find out about their players and their leadership and he doesn’t have any doubt what he will find out — that his team will come back ready to work.

Iowa is now 2-1 and will face Western Michigan Saturday at home.