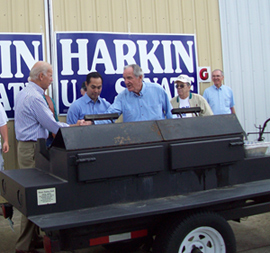 “We are much stronger when we act in concert with our allies and the international community,” Biden said, “and that’s exactly how he’s stepped up to deal with the atrocities that have occurred in Syria.”

Biden began, though, with a brief nod to speculation about whether he may run for president in 2016.

“It’s amazing when you come to speak at the Steak Fry, a whole lot of people seem to take notice. I don’t know why the hell that is,” Biden said, getting laughter from the crowd. “You’ve attracted the entire national press corps here.”

Eighty-seven-year-old Betty Byrd of Boone, a Biden backer in the 2008 Iowa Caucuses, is hoping Biden runs in 2016.

“He says all the right things. Even though he’s getting older, that’s not going to slow him down,” Byrd said. “…He can handle anything and he’s got the temperament.” 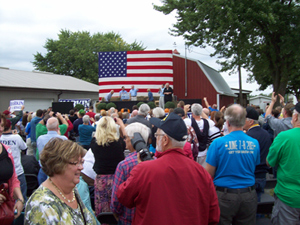 But many in this afternoon’s crowd are hoping Democrats might break the glass ceiling in 2016 and select Hillary Clinton as their nominee. Biden, who is 70, did not mention Clinton in his 35-minute speech, but instead touted the work of the Obama Administration on domestic issues like college loans, the auto industry bail-out and the Affordable Care Act.

“From that day in August of 2008 when the ticket was announced, the president and I have had a laser focus on one thing: raising up the middle class,” Biden said.

At the end of his speech, Biden defended the president’s handling of Syria. Biden said it was President Obama who first “raised” the idea that the U.S. and Russia should “jointly” secure the stockpile of chemical weapons in Syria.

Biden had snapped at Putin a few moments earlier. Without mentioning the law Putin signed which bans the encouragement of homosexuality, Biden said the American public is far ahead of this country’s political class in recognizing the “human dignity” of same-sex marriage. 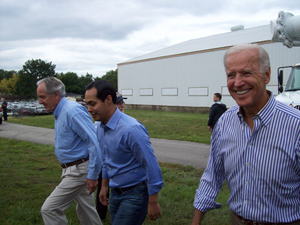 “It’s always been the story of the history of the journey of this country that the American people have been ahead,” Biden said. “And I know I’ve been criticized for saying this, but I’ll say it again: That’s what makes America exceptional.”

Putin recently wrote an opinion piece in The New York Times that took issue with the idea of American “exceptionalism.”

Senator Tom Harkin’s speech at the Steak Fry touted Democratic candidates for congress as well as Democratic leaders at statehouse, plus Harkin made it clear to the crowd of Democratic Party activists that he is backing Bruce Braley as his replacement in the senate. Harkin’s speeches at these annual events always include jibes — at the expense of Republicans — and this year was no exception.

“We’ve endured visits by Rick Santorum, Rand Paul, Ted Cruz, Governor ‘Oops’ Perry is on his way,” Harkin said and the crowded booed the mention of each name. “All I can say folks is the clown car is filling up pretty rapidly early in the season.”

Organizers say about 1300 attended this year’s Harkin Steak Fry in Indianola. It rained at the Warren County Fairgrounds in the late morning and over the noon hour as people gathered under tents to eat their steak lunch, but by the time the speech-making began the rain had stopped.