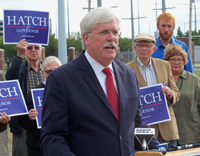 After months of what he called an “exploratory phase”, Democratic State Senator Jack Hatch of Des Moines announced today he is running for governor.

Hatch made the announcement across from an abandoned manufacturing plant in a vacant lot that contained weeds and goat droppings. “We’re standing at one of the largest environmental disasters in Iowa’s history. Standing in front of us is the old DICO plant,” Hatch explained. “They made and manufactured wheel rims. And they used a solvent to clean them. The problem is that solvent was a cancer-causing toxic chemical and it was seeping into the Des Moines water works — which is a hop, skip and a jump from here.” 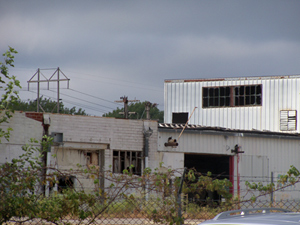 Hatch says he started working as a freshman legislator to get DICO to take responsibility for its pollution, and that was when he knew he wanted to commit to a career of public service. Hatch says he now wants to continue fighting for Iowans as governor.

“I understand that the stakes are high. This is no time to surrender to the status quo of a governor whose only goal is to be the longest serving governor in America’s history,” Hatch says. “Our governor and our government needs to fight for the middle class of this state, and that’s what we plan on doing.”

Hatch was critical of the governor’s economic policies, saying the jobs being created are low wage. He was asked how he would create more jobs, and referenced Governor Branstad’s last campaign pledge for creating jobs. “Well, you noticed I didn’t promise 200,000 new jobs. Iowa’s going to create the economy and we’re going to grow our jobs because we are going to grow it in the small towns and communities. That’s where the economy grows. We’re going to leverage state money and private investment with areas throughout the state that have opportunities,” according to Hatch.

He says the state economic development director and governor shouldn’t be paying company’s outside the state to create jobs. “Now when Terry Branstad gives 110-million dollars in tax credits to an out-of-state firm, I can go to any community in the state and say ‘would you like some of that?’,” Hatch says. “We wouldn’t be creating 165 jobs. We would be creating 11,000 jobs if we partnered with investors and city resources to really leverage our resources.” 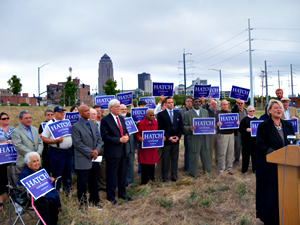 Hatch cited his work with his wife Sonja Roberts creating affordable housing as an example of how a small business can leverage a variety of resources. He says their company has built nearly $100-million  in properties in Iowa.

State Representative, Tyler Olson of Cedar Rapids is also running for the Democratic nomination. Hatch refused to answerwhen asked  how he stacks up against Olson. “We are going to win the primary because we are focusing on Terry Branstad. Terry Branstad is the governor of this state and that’s who we are running against,” Hatch replied to the Olson question.

Hatch says his other goals are an increase in the minimum wage, making Iowa the healthiest state in the nation by bringing health insurance to every child, making college more affordable and improving water quality.

Republican Governor Terry Branstad’s campaign sent out a news release this morning, before Hatch’s announcement, saying Hatch was a “liberal” who would “halt progress” made during Branstad’s fifth term as governor. “He has voted against a lot of things that we think are critically important to grow the state’s economy,” Branstad said this morning during a conference call from India, where he is wrapping up a trade mission.

Branstad, however, won’t elaborate further, saying it’s up to Democrats to decide who their nominee should be.