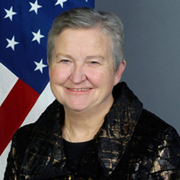 Iowa’s governor, secretary of agriculture and the state’s top economic development official say there are “tremendous opportunities” for business with Indian companies. Governor Terry Branstad spoke by phone with reporters during the last day of his week-long trade mission to India.

“We had a number of great calls and personal meetings with a number of Indian companies and I’m very hopeful we’re going to see additional economic development investments in Iowa as well as additional growth from Iowa companies here in India as a result of this trip,” Branstad said.

Nancy Powell, the U.S. Ambassador to India, is a Cedar Falls native who graduated from the University of Northern Iowa. Iowa Ag Secretary Bill Northey said the ambassador was instrumental in providing suggestions on how to build connections in the country and in helping kick off the trip by hosting a reception for the Iowa delegation.

“The reception in Mumbai — it was an absolutely packed room full of folks and every time you turned around there was somebody coming up wanting to talk about the opportunity to work with Iowans and what kind of companies they could work with,” Northey said, “and these are very advanced, very technologically savvy folks that are there, in the midst of a very challenging country.”

Northey doesn’t think India will start importing large quantities of U.S. ag commodities soon, but he predicted it’s coming “down the road” given the country’s rate of population growth.

“Your head is full of ideas and opportunities after the conversations that we’ve had,” Northey said.

Iowa Economic Development Authority Debi Durham noted that India is the world’s largest democracy, with an economy that’s expected to grow at a five percent rate this year and a growing population that should be larger than China’s within 15 years.

“Why haven’t we been to India here sooner is the question because there is immense opportunity here,” Durham said during the conference call.

A few Indian businesses have already invested in Iowa, according to the governor, including a company in Keokuk where six-hundred are employed. Branstad told reporters it may be “a matter of months” before an Indian company announces a “really significant” investment in Iowa.

“We had 32 members in this delegation,” Branstad said. “Many of them had separate meetings and so there’s a lot of, I think, things that could come out of this and will come out of this in the months and years ahead.”