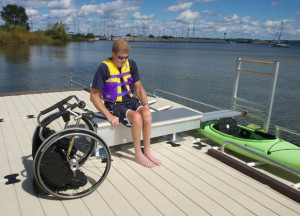 Gliding in a small boat on the open water brings a feeling of freedom and soon, it’ll be easier for people with disabilities to gain access to watercraft at one of central Iowa’s most popular lakes.

Ben Page, director of Parks and Recreation in Des Moines, says the city’s being given a new device that’s now perched at the end of the dock at Gray’s Lake Park.

“The EZ Launch system is a stainless steel bench that helps folks with a disability, such as being confined to a wheelchair, be able to transition from the wheelchair into a boat of their choice that’s accessible, such as a canoe,” Page says. “It helps bridge that between stepping down into the water, helps them have one more additional step into the water so it’s a safe transition.”

The city rents paddleboats, sailboats, canoes and kayaks for use on the 100-acre lake. Page says not all of the boats are easily accessible, but that’s changing, too. “Canoes, the way they’re made, they work for folks with disabilities or without, but we don’t have paddleboats that are powered by your arms,” Page says. “We’re going to buy one of those here in the near future. The watercraft rental season is beyond us now, the weather’s changing, so next spring, there’ll be a couple of new boats out there.”

The non-profit group Friends of Des Moines Parks raised 110-percent of the cost of the $15,000 E-Z Launch system — with that extra 10-percent going toward the purchase of several new watercraft.