You are here: Home / News / Senator Grassley to seek seventh term in 2016 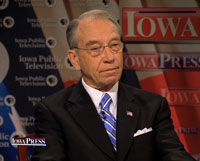 Republican Senator Chuck Grassley today announced he intends to run for reelection in 2016.

“I’m making plans, but it’s not taking much of my time,” Grassley said. “I’m concentrating on doing my job for Iowans, being there when we’re in session, doing my oversight, doing my legislation, holding my town meetings in the 99 counties every year and just doing what a senator ought to do and I’m a firm believer if you do a good job what you’re doing, people recognize it and the future takes care of itself.”

Grassley made his comments during taping of the “Iowa Press” program that will be broadcast on Iowa Public Television tonight at 7:30. Grassley has held elected office in Iowa since 1959. He was a member of the Iowa House for 14 years and served six years in the U.S. House of Representative before his election to the United States Senate in 1980. Grassley celebrated his 80th birthday this past Tuesday by running six miles.

“I like serving Iowans. I enjoy my work. I feel very good about being able to do the job and there’s a lot to accomplish.”

Iowa’s other Senator — 73-year-old Tom Harkin, a Democrat — is currently in his fifth term and no other state has more seniority in the senate. Harkin announced this past January that he would not seek a sixth term in 2014, sparking speculation that would pressure Grassley to retire as well, but Grassley told reporters Harkin’s looming exit had the opposite effect.

“You get a lot done with seniority,” Grassley said. “I think that if Iowa is going to start over two years from now with two very junior senators, that it would hurt Iowa’s opportunity to get things done in the United States Senate.”

Grassley currently ranks as the second-oldest senator. California Senator Dianne Feinstein is four months older. If Grassley wins reelection in 2016, he would be 83 when he starts his seventh term in the Senate — and 89 when it ends.

A spokesman for Republican Terry Branstad — who is positioned to seek an unprecedented sixth term as governor in 2014 — says Branstad “is a long-time supporter” of Grassley  and believes Grassley “is a tremendous asset to the people of Iowa as our senior senator.”

In 2004, Grassley won reelection with 70 percent of the vote. His Democratic opponent that year was Art Small, a former state senator from Iowa City. In 2010, Grassley finished with 64.5 percent of the vote in a race against Democrat Roxanne Conlin, a Des Moines attorney who ran against Branstad for governor in 1982.