You are here: Home / News / State water levels still lacking in many areas 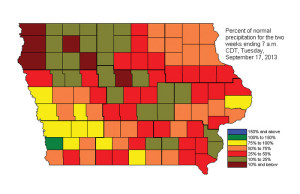 The latest water summary of the state shows a wet May and June were offset by the dry months that followed them.  Tim Hall tracks the water situation for the Department of Natural Resources.

“As we sit here right now today, we’re not quite as bad off as we were at the same time last year — but we really have not made much improvement in the overall hydrologic conditions in the state. Stream flow is back down to really low levels, we’ve got some ground water concerns in parts of the state,” Hall says.

Central Iowa is near at historic low levels for shallow ground water.  Hall says the timing of the rain has been more of a problem than the quantity.

“Sometimes it’s not enough to just look at the number of inches of rain we get,” he explains. “Because if all that rain comes in a very short period of time, it creates flash flooding, it creates a lot of stream flow and that water moves through the state of Iowa into the major rivers and away. And we don’t get as much benefit from the same number of inches of rain if they had fallen in a period of a month instead of over a few days.”

Concerns about the groundwater levels are still present, but not in the same areas of the state. “We were very, very concerned last year with shallow groundwater in the extreme northwest part of the state– way up near the Minnesota and South Dakota and Nebraska borders along the Missouri River,” Hall says. “They’ve done a little bit better this year. The concern has sort of shifted to the east and the real areas of concern now are the Raccoon River Valley and some of the communities in there.”

The concerns about low water levels are likely to remain as we head into fall. “One thing that tends to be working against us at this point is we’re beginning to go into the months of the year where precipitation is not really high in the first place,” Hall says. You can see a thorough review of Iowa’s water resource through September 17th at: www.iowadnr.gov/watersummaryupdate.