You are here: Home / Health / Medicine / Study: 1 in 4 parents admit to leaving child unbuckled in car 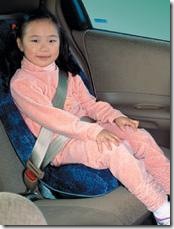 The group Safe Kids Worldwide has released a study that finds an alarming number of children are not being buckled in when they travel in a vehicle. Lisa Roth, coordinator of the Safe Kids Iowa Coalition, says car crashes are the leading cause of death among children.

“This study points to the fact that we have one in four parents who say they’ve driven with their child unrestrained at some point. That’s an alarming statistic for me, simply because we advocate for buckling up kids on every ride, every single time,” Roth says.

According to the study, in 2011, 679 children under age 12 died in car crashes in the U.S. A third of those children were not in a car seat or buckled in. The study notes a common reason a parent let their kid ride unrestrained was because they were only traveling a short distance.

“We know that 60 percent of crashes involving kids occur less than 10 minutes from their home. So, that certainly is not a good reason not to buckle up a child,” Roth says. Other reasons parents gave for not buckling up a child include: there was no safety seat in the car, they were holding the child in their lap, they were traveling overnight, or they let the child out of the seat as a “reward.”

Roth says parents need to remember their behavior can greatly influence their children’s behavior. “Kids are always learning by watching their parents, so if a parent isn’t buckled or says it’s okay to unbuckle, that just really sends a powerful message to a child,” Roth says.

It’s against the law to leave a child unrestrained in a vehicle. Children who are under the age of one or weigh less than 20 pounds must be in a rear facing car seat. Children must be in a car seat or booster seat until at least age six. Children should also remain in the back seat until they are at least 13, because of air bags.

Roth notes that most parents in Iowa are buckling up their kids, but many aren’t doing it properly. She’s encouraging parents to have their car seat inspected to make sure they have it installed in the proper manner. You can find information about child safety seat “check ups” scheduled around the state at the Blank Children’s Hospital website.