You are here: Home / News / Comedian Ron White to make a stop in Iowa (AUDIO) 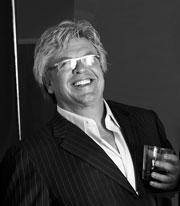 One of America’s top stand-up comedians is making a stop in Iowa next month, but the performance won’t be for everybody.

Ron White describes his “mature audiences only” show as, “a little rowdy.” In a phone interview with Radio Iowa, White says: “I don’t try to make everybody laugh, I just want to make my fans laugh. My fans and I are a group of people that like to enjoy life and we go out there and do it. Whoever doesn’t like it can go jump off a cliff.”

The Texas native is known as a cigar-smoking scotch drinker. On-stage, he typically has a glass in one hand and a stoggie in the other. He says he doesn’t change up his show based on the city, so the Des Moines performance will be much the same as Dallas or LA.

White’s themes, he says, are universal. “Early on, people would take me as a regional comic but we sell just as many tickets in Detroit,” White says. “We all experience the human condition in the same way. If you have to get up and do something you don’t want to do, if you’ve got kids you’re responsible for, if you have to do all these things, then there is no difference between somebody in Alaska and somebody in Miami.”

The 56-year-old has four albums that have sold more than 14-million copies combined and lately, he’s dabbled with acting, though he says he’ll be staying in the stage spotlight. “I’ll always be a standup comedian, that’s all I am,” White says. “I do some movies. I’ve got one that’s out right now called, ‘Jayne Mansfield’s Car,’ it’s a Billy Bob Thornton movie.”

White’s official Facebook page has more than 530,000 followers but he admits, he’s not a big social media guy. He says he has more luck with Twitter. “What it does for me is, it gives me stuff to do with the stuff I write that’s not funny enough to do on stage,” White says. “I have notes and notes and notes that I can turn into tweets and so we try to send something out every day. The fans seem to dig it.”

White started doing standup in 1986, opening for legendary comedian Sam Kinison. He joined the Blue Collar Comedy Tour in 2000 alongside Jeff Foxworthy, Bill Engvall and Larry the Cable Guy. That show toured for more than three years to sold-out audiences in 270 cities, grossing more than $35 million.

Since 2004, White’s been one of the top three grossing stand-up comedians on tour in America. He appears at the Des Moines Civic Center on October 5th.