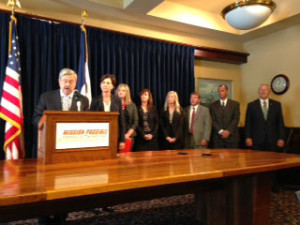 Governor Branstad and the Iowa Grocers.

Customers at over 260 Iowa grocery stores will see special coupon pads in the check-out aisles in October, for donations that will help pay for the governor’s anti-bullying conference in November. Michelle Hurd, president of the Iowa Grocery Industry Association, says independent grocers along with chains like Hy-Vee and Fareway are participating.”Our members care deeply about the communities in which they operate and are happy to have the opportunity help raise funds for such an important cause,” she says.

An initial goal of $50,000 has been set for the fundraiser, and that would cover more than half the cost of the upcoming anti-bullying conference for teachers, administrators and students. A code on the coupons will be scanned at the grocery store check-out, for a $1 donation.

“As one of the top employers of today’s youth and advocates for our the communities that we live and serve, our members are excited at the opportunity to help Iowa educators and students combat bullying,” Hurd says.

Hurd made her comments this afternoon during a news conference in the governor’s office.

AUDIO of Hurd and others speaking at news conference about the grocers’ initiative.

The governor’s bullying prevention summit will be held in Des Moines on November 4. A 2012 survey of Iowa youth found 57 percent had been bullied in the previous month.