You are here: Home / Sports / Iowa State prepares to return to the football field at Tulsa 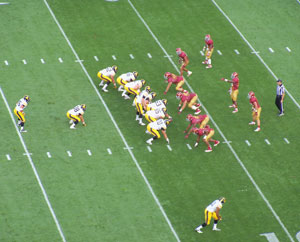 Iowa State has been off since playing Iowa.

Iowa State coach Paul Rhoads says the Cyclones’ health has improved as they get set for Thursday night’s game at Tulsa. Center Tom Farniok has returned after suffering and injured knee in the opener against UNI and quarterback Sam Richardson’s ailing ankle has improved. He says Farniok has practiced without pain and will start, while Richardson has a nagging ankle injury that he has to deal with.

This will be the team’s third meeting in a little more than a year. Tulsa beat the Cyclones in the Liberty Bowl but Rhoads says revenge is not their motivation. “Our kids will be hungry to play this game and fight to win this game because it’s our next game, it’s our third game of the season and we haven’t gotten one in the win column yet,” Rhoads says  “It it’s a loss of the Liberty Bowl trophy and that game at Tulsa that does it, if that’s truly what it takes, then we’re in trouble overall as a program.”

The Cyclone defense will need to find a way to slow down Tulsa’s ground game. ISU is giving up 223 yards per game on the ground and gave up 317 to the Golden Hurricanes in the Liberty Bowl. Rhoads says they got to continue filling the gaps and play with the speed and pursuit that he sees out of his team on the practice field.

This will be Iowa State’s first road test and Rhoads says they will practice against crowd noise in preparation to be able to handle the crowd. Rhoads says a road game also gives a team a chance to jell and come away with a big win. “A lot of times it’s good and we will be looking forward to taking a business trip on the road,”Rhoads says.